Pundits are picking Hillary Clinton will become the first US presidential candidate to spend $US1 billion on a campaign.

That means a lot of fundraising, some of which is being done by Super PACs (political action committees) to skirt restrictions on donations.

One PAC, called Balance of Power, is raising its share via Facebook, where it is selling everything from Hillary Clinton action figures to life-sized cardboard cutouts of Ms Clinton (both presumably of ironic appeal to millennials) along with more conventional fare like T-shirts (check it out at hillarypac.org).

Its slightly scary merchandise is being sold via a Facebook app called BuddyBid, made by the Auckland company of the same name.

Closer to home, BuddyBid has just landed another major new customer: Woolworths Australia. The giant retailer will initially use BuddyBid to sell product under its “The Wine Market” brand in a promotion starting next week. It will join other clients including Panasonic and Fairfax.

It takes a village to raise money on Facebook: Hillary Clinton Super PAC Balance of Power uses BuddyBid to push merchandise on the social network. 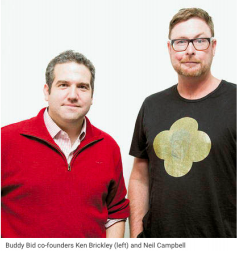 NBR first encountered the startup back in 2013, when it had just two staff: co-founders Neil Campbell and Ken Brickley.

Mr Campbell was chief executive of a real-life auction house, Webb’s, who had an itch to take on Trade Me.  But rather than go head-to-head with the juggernaut, as so many have in the past, BuddyBid was created as a Facebook app (a service that can be used on the social network). It gave BuddyBid a point of difference, and also made the world its stage rather than just New Zealand.

BuddyBid lets its clients run a “social auction” on Facebook (like a Trade Me auction but on social media), or place what it calls a “social classified” (you guessed it, a classified ad on Facebook).

Mr Campbell’s mantra is, “If you find them on social, let them transact on social.”

For example, Australian client GraysOnline uses BuddyBid to auction cases of wine via Facebook. If bidding reaches the reserve, a case is sold.

But here’s the clever bit: If a case of wine doesn’t reach its reserve, Grays still gets useful data: the details of every potential customer who placed a bid. “It’s a lead-generation tool,” Mr Campbell says of this treasure trove of data on “underbidders.”

Another selling point for BuddyBid is its customisability. The Clinton SuperPac chose the Kiwi company because it was the only one that could quickly customise deals for different states, and quickly calculate the cost of, say, marketing a T-shirt to 18-to-34 Latino females in New Mexico.

Mr Campbell won’t disclose financials but he does say his company now has 21 staff, including a general manager just hired for Australia (Therese Tarlinton).

It has raised $1.2 million from investors from outside investors, easily the largest of whom is (whisper it) Mark Weldon. It has no immediate need or plans for another capital raise. 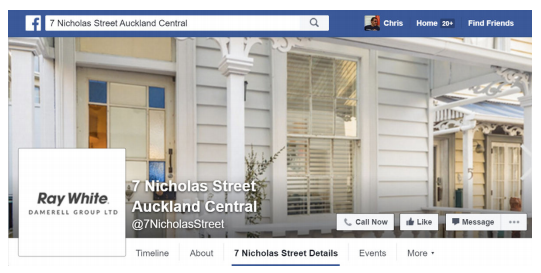 The most significant development for the company over the last few weeks has been non-financial.

“BuddyBid has been approached by Facebook and fast-tracked into its elite development stream which enables us to build directly into its core API. This places us into a pretty exclusive club.”

Mr Campbell says BuddyBid is the first company in Australasia to get on to the core API programme, which among other perks gives it access to two Facebook engineers per week (Facebook couldn’t immediately verify the first-in-Australasia claim).

With so many thousands of apps jostling for attention on Facebook, it’s a big deal to get in this insider’s club.

It has helped BuddyBid become one of the first companies to take advantage of the social network’s new automated “chatbot” feature for company sites.

Mr Campbell says BuddyBid expected “fast-followers” to imitate its model but so far it has the social auction space pretty much to itself.

“At first, we saw Facebook as a potential competitor,” he says. The social network could steamroll his company if it added its own social auction app. “But in the past six weeks, we’ve been approached by Facebook and have been working cooperatively with it over building this particular solution.”

Could Facebook’s invitation to the API programme be a precursor to the social network buying BuddyBid?

For the immediate future, BuddyBid’s new “social classified” offer is its main point of focus.

Mr Campbell says real estate markets are a target, with Barfoot & Thompson, Ray White and ReMax all signed on…