Mention the words ‘online’ and ‘auction’ and it’s likely that there are two major brands that spring to mind. However, Neil Campbell and Ken Brickley have added another name to the mix that offers a clear advantage to businesses that value their brand and their investment in social media. BuddyBid is a white-labelled social auction application that enables businesses to monetize their established social communities. With BuddyBid, businesses run an auction under their own branded labelling, while the social experience of Facebook engages users and grows the audience. Catherine Murray spoke to Ken Brickley and Neil Campbell, co-founders of BuddyBid, to learn more about how this application is building brands and engaging consumers on a global scale.

Business owners know that they need to have an online presence, but achieving this in a way that preserves their brand and uses their existing online community can prove a steep learning curve. As CEO of Webb’s Auctions, Neil Campbell says he has looked at the movements of social media over the past several years, questioning how it can best be utilised for their business. 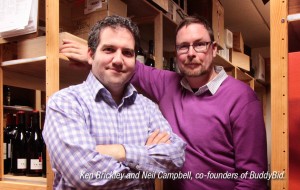 “There’s a very easy logic around extending into social media, because we publish [our catalogues] on a regular basis anyway,” explains Neil. “Social media is a very specific environment, that can also be very powerful. On the flipside we had Trade Me coming alongside, basically soaking up a lot of the bricks and mortar businesses. But we never wanted to go into that space due to brand equity issues.”
Therefore the challenge was to develop a product that protected brand equity, made use of a business’ investment in social media, and provided a monetary return. “We didn’t really want another social media tool that just told our story in a different voice,” says Neil. “We wanted something that engages what people already know about Webb’s Auctions – which is that it is a transactional house. People come to us to buy and sell.”
While there are a plethora of online auction websites – with Trade Me and eBay being the most recognised in New Zealand – Neil says one element that none of them offer is the ability to put your business’ brand in front of the client. “We believe quite strongly that there is an appetite for exchanging real value within social platforms. It’s a natural step to have the brand equity variable attached to people competing socially online and transacting in real value.”

“Auctions are a great fit with the social media environment,” adds co-founder Ken Brickley. “Auctions have been social for a millennium. They are social gatherings, attended in much the same way as sports – we don’t know what the outcome is, but we’re drawn to it, we comment on it, and we discuss every aspect of it. When I bid on something using BuddyBid, and it goes to my friends’ newsfeeds, the engagement is astronomical compared with the engagement of just commenting and liking a photo – and we think that it’s due to the fact there is an unknown outcome.”

BuddyBid was launched in beta just several months ago, after being in development for the past year. Ken says they began by adopting the theme around ‘minimum viable product’ from Eric Ries book The Lean Startup. “Rather than building every single feature, you just take the core features that allow you to prove or disprove your hypothesis. The bells and whistles are added on later. That theme was at the core of our objectives when building this product.”

“The development of BuddyBid started with three key hypotheses”, explains Ken. “The first being, would this product be more viral inside a social platform? The second, would I get a better price for a product if I marketed it to fans of a specific subject matter, versus whoever came through the front door looking for a product? The third was would it drive traffic back to the brand’s website? We’ve been able to tick all those boxes, and that’s when we knew we were on to something.”

BuddyBid is now in 112 countries and is on a steady climb upwards. Neil and Ken took advice from experts in the field, such as Kim Dotcom and the architect of the Sydney Stock Exchange, on how to create an application that can have lots of traffic thrown at it, and survive. “The architecture of the code has been built in a way that it is ready to scale both dramatically and globally,” states Ken.

So what sets BuddyBid apart from the other options available to businesses? Ken says it’s because it addresses several key issues. “If you have a brand that you care about and you want to auction an item, then putting it on another auction website does not increase your brand value. For example, if you put a signed sports jersey up for auction on eBay, and announce it to your 100, 000 fans on Facebook, they then click on over to the external website, where they are just two clicks away from finding another jersey that is perhaps better. By hosting on your own Facebook page you’re corralling your fans, and the more bids and comments there are, the more fans and their friends will see the auction, therefore growing the brand’s audience.” The auction experience is also skinned 100% around the brand, explains Ken. “The auction incorporates your colours, and has the look and feel of your brand. If you’ve invested in a brand, and you care about it, then you don’t want that brand equity going elsewhere.”

Part of what BuddyBid is doing involves helping brands move to a social commerce platform by re-conditioning audiences to purchase, rather than expect something for free or heavily discounted. “What we are finding at the Board level is that lots of money is going into social media, but they’re not doing a good job of measuring and getting a return on investment on that spend. BuddyBid gently conditions, in a fun way, the brand’s audience to pull out their credit card, instead of just getting stuff for free via social media.”
BuddyBid also allows an auction to be embedded on a brand’s website. The auction is linked, with activity shown live on both the Facebook page and the website. “You can leverage the traffic that is already coming into a website, and hold the auction there, and not have to know a stitch of coding,” says Ken.
Although BuddyBid has only been operational for several months, the business is already looking to add to their present staff of five. “We’re actively seeking world-class developers, engineers and marketers,” says Ken. “We’re also looking for engineering developer interns who aren’t afraid of difficult tasks, or coming up to speed with a new language. We have a lot of work that needs to be done, and it’s a great opportunity for a junior developer who would like to experience the same type of technology that Facebook and Twitter are built on.”
As the online world and the way in which people interact with it keeps evolving, so does the world of BuddyBid as a business. In the near future, a development concerning additional technology and a new investor will be revealed, involving business-to-business rather than brand-to-consumer relationships. Currently run from central Takapuna, there may also be a location move to be closer to Webb’s Auctions powerhouse in Newmarket – a blend of the traditional and online auction spaces.

Neil concedes that social media is still a big unknown for many people. “The idea of transforming our core business purely around social media would never have received the support that we’ve experienced with BuddyBid. But when you say it’s the vehicle to increase the transactional value of the business, then you’ve got buy-in. It’s also about company reputation, and most business owners who are successful in their field have a very strong belief around the value of that reputation and goodwill.”

“For those small businesses who know that they need to get into social media, and those who have already invested in social media, this is a natural progression to social commerce,” adds Ken. “For those getting started there is a right way and a wrong way to go about it, and we can help businesses go through those first steps.”